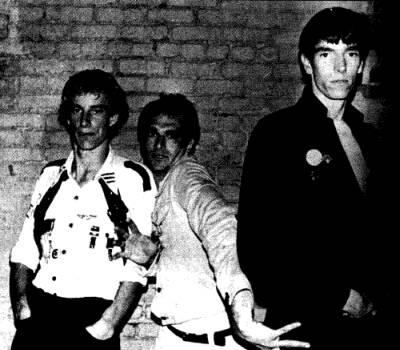 I have to admit that my ignorance is pretty complete when it comes to the Dils.

I do know one thing, however. The Dils have a history that's been obscured by the fact that they were a "political" band. Now, there's no denying that politics was an important part of the band, not to mention one of the things that's made them so influential, but people get so caught up in the Class War that they don't pay attention to anything else.

For instance, did you know that the Dils were one of the first (if not the first) west coast bands to tour across the country? Sure, a couple LA and SF bands flew out to New York in '78 and '79, but the Dils set up a tour all the way across Canada and the upper midwest, ending in a dingy New York club called Hurrah's, 3300 miles later. Before DOA and Black Flag (but after the Ramones) the Dils were doing it, spending hours in a sweatbox of a van to play for thirty or forty minutes in a strange town for next-to-nothing, then getting back in the van to do it again.

The Dils played to audiences that would later become the Big Boys, the Dicks, MDC, Solger, the Fartz, and the Wipers. They provided crucial inspiration for bands to get out there and tour. They showed that it could be done, and their immortality has shown that it should be done.

Unfortunately, I can't shed much more light on the band right now. I can tell you that:

Normally I'd stretch this out to a nice sized bio, but I'm going to try to interview some ex-Dils and I'll wait until that's done first...

There's still enough shit to keep you busy for a while, at least.

If anyone has any interviews with or pictures of the Dils, get in touch! I'm also looking for any flyers, particularly with pictures of the band, and any old issues of NO News. Top dollar will be paid for originals and a fair trade done for photocopies.

As far as I know the information on this page is accurate and complete, but it's more than possible that there are mistakes, and it's a certainty that there are omissions (particularly in the gig list). If you spot any, email me!

Special thanks to Peter Urban, Stephen Schwartz, and Jean Caffiene.

The Dils have a history of violence, chaos, and frustration at their performances. For instance, at an early gig, an amp draped with the hammer and sickle was cause for a heated argument between the band, the club manager, and the local sheriff. When the flag came down, so did the band.

...the Dils shocked and left inarticulate most of the 40-member audience...

US - What distinguishes New Wave from old?

CHIP - It's cut your hair now. It doesn't take years to grow back.

TONY - It's a sense of purpose--motivation--de-emphasis of musical virtuosity.

DILS - It's an alliance.

The Dils are activism in search of activity. They foster what they call "irresponsible, unthinking physical action--busting tables, glasses--and total lack of inhibition."

BLACK RANDY measures your amount of political conciousness by the amount of time you've spent in jail. If you threaten, you're going to be put away. His song TROUBLE AT THE CUP was written in reaction to the police clampdown on teenage hustling in front of Hollywood's GOLD CUP--real runaways with no future! American punk is like babysitting!

SLASH: I saw you were quoted in a Rolling Stone article about that miners' benefit...

CHIP: Any article, even the Slash articles, even this--if it ever comes out--is fun for about five minutes, then you realize how totally worthless they are. They don't mean shit. We've got a foot-high pile of articles, and I still go without food for periods of time, and I still can't pay my bills.

TONY: They're good to wallpaper your bathroom.

They're pissed, in their early 20s living in America, and what they do is real, it works. Their stance is not a gimmick, they appear ready to carry it through to the end. A band with their moves and looks could easily find an easier route to success than standing up for social revolution.

There's like a war going on in San Francisco.

The Dils songbook. A text-only version (with lyrics to a few more songs) is also available.

This section is incomplete. If you know of any other Dils shows or have memories, flyers, or photos for the ones I know about, email me! 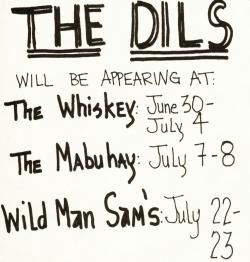 August 3 with Marcus @ the Starwood in LA

August 5 with the Screamers and Germs @ Larchmont Hall in LA

August 12 with the Weirdos and Devo @ Myron's Ballroom in LA

October 15 with the Zeros, Controllers, Punches @ the Masque in LA

October 21 with the Avengers @ Slush in LA 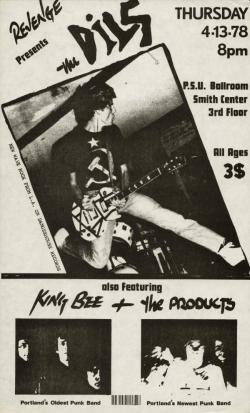 January 6 with the Liars, F-Word, and the Avengers @ the Masque in LA

missed the liars but reliable sources said they were good. f-word did a very dynamic set with lotsa pogoing, they're really improving fast. a band you don't want to miss. the dils were really hot tonite doing all their favorites with incredible energy (chip & tony leaping into the air) and chip even told t he audience to pogo and they were, the audience hace a great time. the dils are misunderstood by a lot of people (other flipside staff) but when it comes to their show, they were great. the avengers came on last and did a fantastic set as always--S.F. #1 band no question!!!

January 7 with the Avengers, F-Word, and the Last @ the Masque in LA

at last the last, these guys have a single out and greg shaw raves about them--and they are pretty good. they do a sixties sounding fast heavy metalish pop set with good songs that emphasize a dominant vocal role. they came across really well but a long set for an opening act.

January 28 with the Avengers @ the Mabuhay Gardens in San Francisco

January 29 with Negative Trend, the Avengers, and the Fast @ the Mabuhay Gardens in San Francisco

February 24 with the Zeros, Eyes, Screamers, Germs, Controllers, Bags and Deadbeats @ the Elk's Lode in LA

When the city council saw this flyer, they shut the show down. The punk underground, ever resourceful, found someone with a basement they could use and the Dils played anyway.

Somehow I don't think it's that Rank & File.

May 1 with X, the Alleycats, and the Consumers @ the Whisky in LA

May 8 @ the Rock Island in Houston

May 11 with Crime, UXA, and the Sleepers @ the Mabuhay Gardens in San Francisco

June 8 with the Weirdos @ the Whisky in LA

I've seen a show with the exact same lineup listed for the 28th as well.

August 31 with Negative Trend @ Reed College in Portland, OR

September 1 with Negative Trend and the Cheaters @ the Bird in Seattle, WA

September 2 with Negative Trend and the Refuzors @ the Bird in Seattle, WA

Benefit for striking Norfolk and Western railroad workers. $415 was raised. This barely ranks a footnote next to the more famous miners' benefit, but this particular labor confilct was quite galvanizing for a Dils fan calling himself Nico Ordway. He founded NO News and devoted the entire first issue to the plight of the railroad workers. The strike popped up again when numerous clippings were reused in the Fortune Favors the Bold Songbook, also published by Nico. Nico's had a political reawakening since then, and writes conservative political analysis using his birth name, Stephen Schwartz.

No News' first issue was focused entirely on three topics: the strike, this benefit, and the Dils. Appears courtesy of Stephen Schwartz.

September 30 with the Avengers, Zeros, and Flak @ the Off Broadway in San Francisco

October 6 with Snookie, the Mutants, Fear, and the Visitors @ Baces Hall in San Diego

October 15 with the Neo Boys @ New Arts Center in Portland, OR

December 8 with the Zeros @ SF Art Institue in San Francisco

January 5 with the Controllers and Flyboys @ the Masque in LA

February 16 with the Avengers @ Pauley Ballroom in Berkeley, CA

May 12 with the Avengers @ Geary Temple in San Francisco

May 17 with DOA and the Shades @ O Hara's in Vancouver

The band were stopped at the border and barely made it to the gig...

June 14 @ the Edge in Montreal

August 30 with X, Weirdos, Alleycats, and DOA @ the Stardust Ballroom in Hollywood

September 7 with the Alleycats @ 1839 Geary in San Francisco

Offers a brief discography and a nice photo gallery.

From the excellent Summer of Hate website/e-zine.